Tradition as a commitment to our guests

In 1925 the "Edelweiss" was opened by our grandfather Fritz Mossauer as a guesthouse and later extended to an inn. In the same year he founded the first ski school in Berwang, which was very active and sporty. 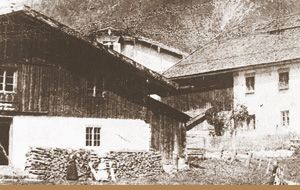 The house Edelweiss at the turn of the century 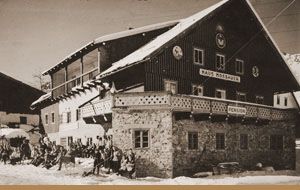 Berwang was already a popular destination for skiers ...

... because it is known and loved for its snowy winter
The war years did not leave us without a trace, because from 1941 to 1945 an air force hospital was set up in the "Edelweiss".

In 1954, our parents Engelbert and Ida Sprenger took over the inn, which they ran until 1974.

Memories of our father can be found through the wrought-iron objects, which he made himself, and the Lüftlmalerei, which he painted in 1962 by Isi Winterholer from Garmisch on our house, which certainly contribute to the valorization of the townscape.

In 1972, a two-storey underground car park with lift for 15 cars was built.

Since 1974 the Gasthof Edelweiß has been run by the Jakob and Johanna Sprenger family, whose aim is to satisfy the guest with impeccable care and rustic cosiness.

In 1987, a hot whirlpool and a Roman steam bath were set up for the well-being of our guests.

The hotel has 20 guest rooms, all with shower, toilet, telephone and radio.

In 1991 our new dining room with about 80 seats was built. In addition there were two children's playrooms.

Since 1989, our two children Manuela and Hartwig have worked as chef and waiter in the "Edelweiß".

In the period from 2005 to 2006, the Edelweiss was extended by a lift, an exclusive spa area, a fitness area and a light-filled conservatory.

The entrance and reception area has been completely redesigned.